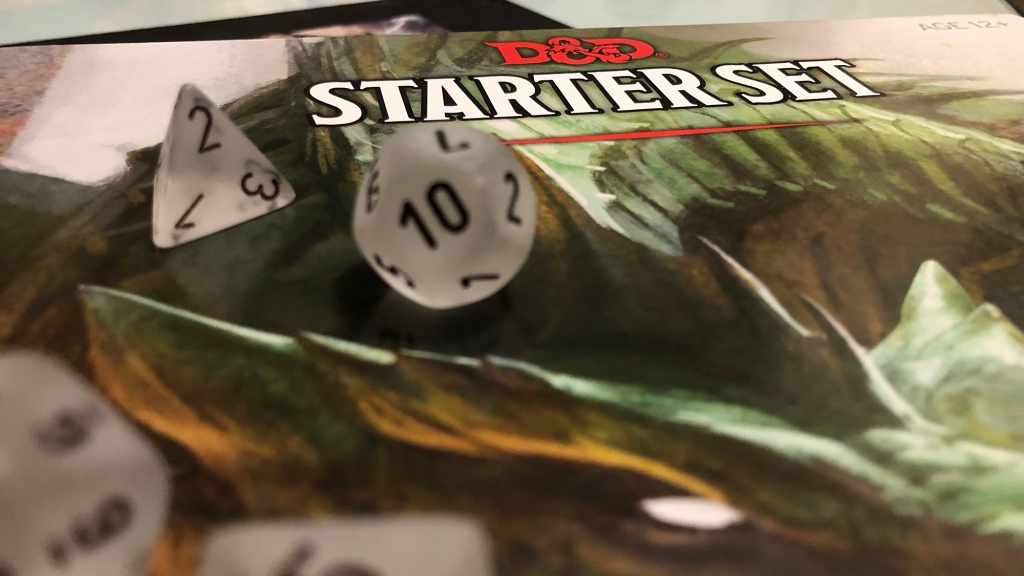 Time management comes with a roll of the dice.

Disclaimer: This is a heavily opinionated piece that derives from personal experience, and the suggestions presented may not work for everyone. If you’d like to share your own experiences with the game, please feel free to comment below!

Boredom is a cardinal sin in my household. When we are not working, it is time to find a new game to entertain us. Usually we’ll play an MMO or console game, but this particular weekend the boredom creeping in was far too threatening. After wandering through the local bookstore, we somewhat hesitantly picked up the Dungeons & Dragons 5th Edition Starter Set.

If you are not familiar with Dungeons & Dragons, it is similar to a dungeon crawling board game such as Hero Quest, but without the board (unless you want one) and without the pieces and cards. (unless you want them.) The Dungeon Master narrates a story, and each player role plays their own character on an adventure through the DM’s world, battling monsters, solving puzzles, completing quests, and reaping the rewards.

Anyone who knows Dungeons & Dragons knows that it is no easy game to master. The set came with an instruction manual for each the player and the Dungeon Master, a set of dice, and a few pre-made character sheets.

Let me tell you– those character sheets are a godsend. For a brand new player, the tedious job of rolling for all of your stats, understanding how they work together, and writing up your entire backstory would be incredibly daunting if you were not prepared for it.

We absolutely were not prepared.

As the Dungeon Master, I attempted to follow the guide for the pre-made campaign meticulously on the first night, fumbling my way through roleplay to try and keep things interesting. This was my first mistake. You should absolutely read through the books in their entirety and get to know the story before beginning the campaign. Knowing the settings allows you to be creative and describe the scenes more easily and in more detail.

In order to play the monsters, you must find each one listed in the back of the book and flip back and forth between this and the campaign. It’s a little tedious, but this keeps the the main campaign pages organized.

What we learned (and didn’t learn)

The starter set is just that- a start.

There are many actions or terms spelled out in the guides that are not fully explained, and you will likely want to rely on the D&D online community or a friend who knows the game to clarify rules or terms of the game. We also ended up picking up the Dungeons & Dragons Core Rulebooks Gift Set once we knew we wanted to play. It goes into far more detail and gives a much better idea of just how realistic (or fantastical!) your game can get.

The attack roll is simply to see if you actually hit what you’re trying to attack. Different types of weapons or spells may require different rolls, as dictated in the player manual. There are a lot of stipulations like this that need to be learned, such as what damage modifier needs to be used depending on what type of weapon you are using.

Running or walking blindly into a new area is probably a stupid idea.

You can do almost anything in the world roleplay wise, and taking a moment to listen carefully or scout an area is almost always best… unless it isn’t.

Our first couple of sessions were a little difficult, as learning the specifics of the game required a lot of stopping and starting. However, as the rules themselves became less difficult, the creativity and fun factor began to ramp up.

How do we fit this in after work?

Choose people who are on a similar schedule and who live close by.

Choosing a weekly night to play can be beneficial so that everyone can plan around the game, but if they live nearby and are on a similar schedule, this may allow for more spontaneous play and progress through the campaign.

You may wish to somewhat ignore your progress through the campaign and focus solely on making each session as interesting and immersive as possible. If everyone is enjoying the game, then the end goal becomes slightly less important and allows you to worry less about what you can fit in to a game session.

3. House Rules are mandatory, and the DM has final say

Often you may not have the time or capacity to measure exactly how many feet apart a player is from a monster. A casual, house-rule solution could include: Monster A is pretty far away, you’d probably have to range attack unless you were moving toward it. Monster B is right up in melee range though.

Sometimes you just don’t have 4 hours to have your party cross the Whispering Waste, and instead you have to just do a couple of wilderness rolls, give them a nap (short rest), and move on.

Developing your own rules to the game keeps the pace of the campaign steady and fun, and alleviates the worry stemming from frantic clock-checking as the night drags out.

Overall, Dungeons & Dragons is a very time consuming game, and may not seem ideal for the adult with a full time job, household duties, and children. However, when broken up into its parts and taken at a casual pace with campaign members with similar schedules, the game can be enjoyed thoroughly within the time constraints. When prepared well, it is heavily immersive and can be a powerful creative outlet (and stress reliever).

We don’t expect to actually play each time we meet. There are a lot of elements to Dungeons & Dragons that take time to prepare. The players may spend hours on developing their characters before the game even starts, and the Dungeon Master is responsible for building entire worlds, dungeons, stories, and characters. Sometimes we do this together with coffee, food, and a good show, and other times we are able to take advantage of the fact that we can prepare characters and world build during times that our schedules conflict. No matter which route we choose, the path always seems to bring us together for a good time.

Found a successful way to work Dungeons & Dragons around a busy schedule? I’d love to hear different methods or house rules that have made the game possible and fun for you. More updates to come on this game in the future!

Begin typing your search above and press return to search. Press Esc to cancel.